Urban agriculture is experiencing a boost in popularity that started several decades ago. It’s now recognized and accepted as a way to experience a variety of environmental, economic, and social benefits. A lot of people — from entrepreneurs and community leaders to the general public — have taken note.

Those interested in modern-day vertical farms, rooftop greenhouses, or community gardens may be surprised to learn that urban agriculture is far from a recent development. It has actually been around since the invention of the wheel.

The history of urban agriculture dates back to about 3,500 B.C., according to the American Society of Landscape Architects’ (ASLA) blog. At a symposium of historians and landscape architects, they discussed how Mesopotamian farmers began setting aside plots in growing cities.

In the same part of the world about 1,500 years later, the semi-desert towns of Persia offered one of the earliest pieces archeological evidence for urban food production. Thanks to urban aqueducts, mountain water was brought to oases to produce food using a great deal of urban waste within the settlement.

Two other early examples come from the Western Hemisphere in the 1400s A.D. A notable instance was the nutritionally self-reliant city of Machu Picchu in Peru. “Scarce water was reused time and again, step-by-step down the mountain,” urban agriculture expert Jac Smit wrote in the foreword of the book “Continuous Productive Urban Landscapes.” “Biointensive vegetable beds were designed to catch the afternoon sun and stretch the season. Water and land crops were brought together to resist the frequent mountain frost.” 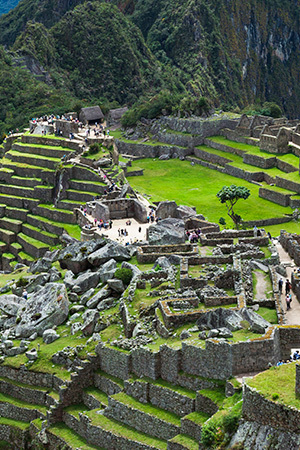 Another notable point in history is from the Aztec civilization. They used “chinampa,” or floating islands, for farming just outside of cities on lakes, K. Michelle Glowa noted in “The Wiley Blackwell Encyclopedia of Urban and Regional Studies.” The island became an important part of the Aztecs’ growth when they needed to support their population, but conquering more land wasn’t feasible.

The History of Urban Agriculture in the Early 21st Century

The precursor to urban agriculture in the 21st century may be the enclosure movement in England. It foreshadowed the Industrial Revolution, and according to authors in volume 44 of “Horticultural Reviews,” the movement “divided parishes and open-access lands with hedges, fences, and walls, wiping out ancient land-use patterns and excluding peasants from vast tracts of land.” Despite social unrest to resist the enclosure movement, the rural poor became displaced. Events like the popular Midland Revolt uprising (and the subsequent Newton Rebellion, which resulted in 40-50 people killed) led to some concessions, like allotments, which are public spaces in the city used for food production.

From 1880 to the early 1900s, allotment gardens became a popular way for European cities like London, Paris, and Stockholm to help the urban poor become self-provisioning. In peri-urban areas, or land that immediately surrounds a city, poor families were given land to garden. This idea wasn’t unique to those European cities, however. Glowa mentioned how several urban planners, designers, and theorist connected that notion to urban farming. For instance, at the turn of the century, Ebenezer Howard’s garden city movement included gardens and larger agricultural fields within walking distance of town. Also, in the 1930s, Frank Lloyd Wright’s Broadacre City advocated for agricultural uses on each home’s one-acre allotment. 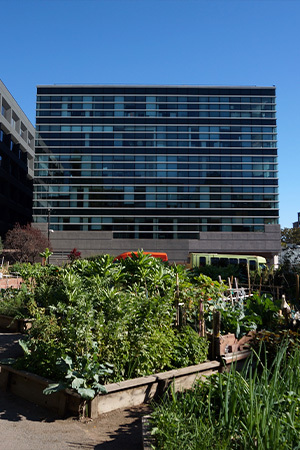 Western governments strongly supported urban agriculture during the two world wars. Agriculture was developed on land plots started during the Great Depression, and propaganda campaigns insisted that citizens should “dig on for victory” in victory or war gardens during the war. At their height, victory gardens rivaled the production of commercial farms, according to the authors of the “Horticultural Reviews” article. Support for them went as high up as possible. In 1917, Woodrow Wilson said that “food will win the war,” and during the Second World War, Eleanor Roosevelt created a victory garden at the White House.

Urban agriculture then experienced a decline. After the war, community gardens became rarer as populations were redistributed, cities were reorganized, and most notably, suburbs expanded.

The result was the separation between food production and urban areas. Urban agriculture wouldn’t come back into the mainstream until it emerged later in the 20th century. That began the movement that exists today.

In the 1970s, urban agriculture became connected to social justice and environmental sustainability.

A contributing factor was postwar urban manufacturing. According to the nonprofit online journal Grist, factories left for the South, and later to Mexico and Asia. High rates of unemployment and residents fleeing urban areas had direct consequences for landlords, who couldn’t make enough in rent to cover their property taxes. As the following excerpt from a 1977 Time article demonstrates, landlords often turned to eviction, arson, and a quick insurance settlement.

In ghetto areas like the South Bronx and [Chicago’s] Humboldt Park, landlords often see arson as a way of profitably liquidating otherwise unprofitable assets. The usual strategy: drive out tenants by cutting off the heat or water; make sure the fire insurance is paid up; call in a torch. In effect, says [then-New York City Deputy Chief Fire Marshal John] Barracato, the landlord or businessman “literally sells his building back to the insurance company because there is nobody else who will buy it.” Barracato’s office is currently investigating a case in which a Brooklyn building insured for $200,000 went up in flames six minutes before its insurance policy expired.

Communities took the opportunity to start fresh. They cleaned up the ashes and planted gardens that could produce fresh foods. Gardening became a way to rejuvenate urban areas and attract more residents. Plus, it helped with inflation and environmental concerns of the time.

Thanks to the work of nonprofit organizations, academic research, and widespread community support, urban agriculture has taken off in the past couple of decades. Now, urban planners, policy-focused organizations, and local governments take it seriously and recognize the environmental, economic, and social benefits urban agriculture offers. As the National Conference of State Legislatures noted in 2017, there have been several examples of state legislation for urban agriculture.

How can you help your city reap the benefits of urban agriculture? Become a better leader with an online Master of Public Administration degree. You’ll learn how to implement public administration theories to real-world situations like developing urban agriculture policies. And because this program was developed in partnership with community leaders and public service professionals, you can be confident you’re getting the right education for your career goals.

Aurora University Online’s MPA degree features no textbook cost and no GRE requirement, and you can complete the program in one year. All courses are taught by expert instructors with extensive experience in their fields.