The percentage of children under the age of 18 in the United States living in single parent households increased to 35 percent in 2014, according to the Annie E. Casey Foundation. In some locations, the number is greater. Chicago has joined cities such as Fresno, Indianapolis and Tucson where approximately half of children live in single parent households, while Cleveland and Detroit lead the nation at 75 percent and 71 percent, respectively.

The typical American family structure has changed. According to the Pew Research Center, many people are waiting to get married or not getting married at all. In 2012, the median age at first marriage for women was 27 and for men was 29, up from 20 for women and 23 for men in 1960. One in five adults age 25 and older in 2012 had never married, up from roughly one in 10 adults in 1960.

With a degree in social work, professionals can become part of the solution for those who are in need.

“One of the most troubling trends for child well-being is the steady decline in the percentage of children living with two married parents,” the Annie E. Casey Foundation explains. “There is near universal agreement among researchers that being raised by married parents in a low-conflict household provides children with tremendous economic and emotional benefits. Children of single parents are at higher risk of negative outcomes later in life, such as dropping out of school, becoming a teen parent or going through a divorce in adulthood.”

The Heritage Foundation provides several statistics that quantify the increased risks that children of single parents face. For families with the same race and amount of parental education, when compared to intact married families, children from single parent homes are: 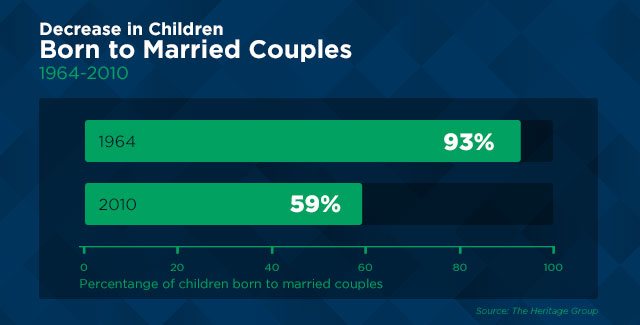 Being a single parent can be challenging. Single parents can face several issues, including the following that are highlighted by the American Academy of Pediatrics:

A number of resources can help single parents overcome the issues that many adults and children in single parent households face. Several options address material and emotional needs.

Federal resources offer assistance for single parents in need of healthcare, shelter, food, childcare and more. The Federal Communications Commission has assigned the telephone number “211” to streamline access to these resources in an effort to provide help for anyone in need. This is a national initiative that is offered to residents of all states.

In addition to national resources and initiatives, single parents can also seek assistance from their local area. For instance, in Chicago, single parents can reach out to dozens of initiatives for help, such as the following examples: Housing Opportunities for Women (HOW) for help with shelter; Connections for Abused Women and their Children (CAWC) for healthcare assistance, shelter and other forms of help; and the Courage Program for affordable housing, basic needs and other services.

Being part of a community can help single parents cope with any difficulties or pressure faced. One such nonprofit organization, Parents Without Partners, brings together single parents for support, encouragement and personal growth. This type of organization can help a single parent improve his or her parenting, socialize with other parents in the same life stage and offer activities for children as well. Other communities can be found at churches, YMCAs and other locations.

In addition to organizations, single parents can benefit from a personal network of friends and family members who can provide support and encouragement that they may lack without the other parent in the household.

As Orla Bardsley writes, “Social care professionals may come into contact with young single parents for a variety of reasons, many of which won’t actually be related to their status as single parents. But whatever the initial contact is about, the challenges they’re facing as a young single parent will be a crucial part of their lives.” Social workers must be cognizant of any related factors or issues the parent may be facing.

A strong education can equip professionals in the social work field to assist diverse populations, including single parents who may have a wide range of needs. At Aurora University, the online Bachelor of Social Work and Master of Social Work degree programs prepare graduates to make a difference in the lives of others. With a degree in social work, professionals can become part of the solution for single parents in their community who are in need.