How to Become a CASA Volunteer

Children who are in the court or social service systems due to neglect or abuse are vulnerable, and they often lack reliable adult advocacy. For the past 40 years, however, volunteers have been stepping up to help protect and guide these at-risk youths during their proceedings.

In 1977, Seattle juvenile court judge David Soukup found himself regularly waking up in the middle of the night worried about children. He worried that he regularly made drastic decisions in his courtroom about how to handle cases of abused and neglected children with insufficient information.

Judge Soukup envisioned citizen volunteers speaking up for the best interests of these children, and he contacted members of the community he thought could help him find such volunteers. He first asked interested people to come to a brown bag lunch to discuss this possibility and 50 people showed. From there, the program has grown a network of nearly 1,000 Court Appointed Special Advocates (CASA) programs in 49 states and the District of Columbia.

When he retired from the bench, Judge Soukup himself became a CASA volunteer. He said the experience was “both the hardest — and the best — thing I’ve ever done.”

Sometimes CASA volunteers are the only consistent adult in an endangered child’s life. They are appointed by judges to watch over and advocate for abused and neglected children and make sure they don’t get lost in the legal and social service system.

CASA volunteers are supported continuously throughout their service. They have opportunities for continuing education and access to online resources provided by the National CASA Association, including a resource library, national Facebook community and an annual national conference. To maintain your status as a CASA volunteer, you are required to submit to 12 hours of yearly in-service training.

Classes studying human behavior in social environments and family dynamics from Aurora University’s online Bachelor of Social Work lay the foundation for informed advocacy for an at-risk child. Graduates of the online BSW are eligible to take the examination for the State Social Work license (LSW).

According to the organization, when you become a CASA volunteer, these are some of your responsibilities:

Cases are assigned by the CASA staff with consideration to the suitability of the volunteer’s background and education and any prior experience as a CASA volunteer. Volunteers of all experiences and backgrounds are needed.

CASA volunteers are not allowed to:

They must also adhere to a very extensive code of ethics.

How to Become a CASA Volunteer 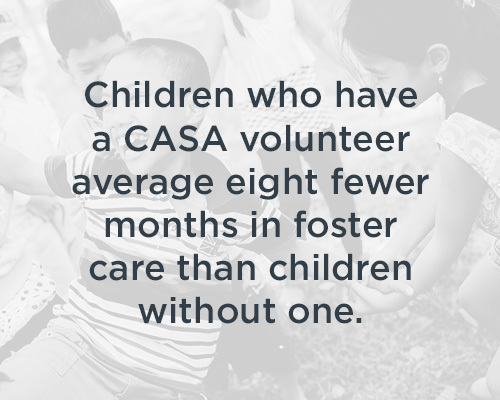 CASA volunteers come from all backgrounds; the only unifying trait of volunteers is empathy for children. You’ll be an advocate for children during the most confusing and traumatic time in their lives. It’s a challenging and fulfilling role that will positively impact the children in your charge.

Volunteers must complete 30 hours of training and pass background checks. Being a CASA volunteer is a 10- to 12-hour monthly commitment. CASA volunteers commit to seeing a case all the way through to the end, which averages around a year and a half.

Other requirements to become a CASA volunteer include:

After completion of the initial training, volunteers are sworn in by a judge as officers of the court. This gives them the legal authority to conduct research on the child’s situation and submit reports to the court.

Not all people who work for CASA are volunteers. Child advocacy can be a career, whether or not it is with CASA.

One such paid career is a supervisor for a CASA program. This is a critical role because they recruit and manage the volunteers. Their main tasks are:

Classes studying human behavior in social environments and family dynamics from Aurora University’s online Bachelor of Social Work lay the foundation for informed advocacy for an at-risk child. Graduates of the online BSW are eligible to take the examination for the State Social Work license (LSW) and to apply for advanced standing in Aurora University’s online master’s in social work if they choose to further their careers.