If you’ve ever thought about creating policies to improve society, a business or an organization, then a Master of Public Administration (MPA) might be for you.

In 1947, Gordon Clapp, then-chair of the Tennessee Valley Authority, defined public administration (PA) “as a public instrument whereby democratic society may be more completely realized.” The field is generally regarded as one whose goal is to improve our society.

The MPA is a professional graduate degree much like an MBA, and many MPA programs require you to take some MBA classes with the core curriculum. A significant difference between the two programs is MPA programs focus on governance. In an MPA program, you learn to apply public administration theories to real-world situations. Coursework includes community relations, budgeting, public policy and nonprofit management.

Careers that benefit from earning an MPA include managers, executives and policy analysts. The degree focuses on the systematic investigation of executive organization and management.

What Is Public Administration?

A career in public administration (PA) allows you to be a decision-maker. PA has a wide range of fields in which you could work, including health care, communications, transportation and criminal justice. You could be a government official, lead a nonprofit or work for a news network, among many other careers.

Is your life’s work to make change and build a better future? A background in public administration can help.

Some jobs in PA are high-profile positions, and professionals in these careers tackle challenging problems. According to NASPAA, a 2011 survey of public administration graduates showed that more than half started work in government positions within six months of graduation.

Public administration prepares you to be a leader and to develop programs and policies. These skills are valuable to employers, and positions in PA tend to pay well. Because PA jobs fall across many sectors, wages vary widely.

According to research, MPA degree graduates stand to earn far more than their non-degree holding counterparts. After earning an MPA degree, 53 percent of professionals are in the $50,000+ salary range for salary. Without an MPA, only about 24 percent reach that salary level.

In general, people earn about $12,000 more a year if they have an MPA compared to those with only a bachelor’s degree.

According to the Network of Schools of Public Policy, Affairs, and Administration (NASPAA), a 2011 survey of public administration graduates showed that more than half of them were working in the government six months after graduating. While the majority may work in the public sector, PA degrees are just as valuable in the private sector.

What Is the Private Sector?

The private sector is any for-profit business or organization that is not under the jurisdiction of the government. Private sector businesses are run with the intent of making a profit and can be publicly or privately held.

Jobs in the private sector tend to be higher paying in general. Even the most prestigious public-sector jobs, like governor, don’t earn as much money as a many private sector company CEOs.

There are exceptions, though. State-funded university staff are in the public sector, and some staff members can make upwards of seven figures. In 39 states – including Illinois – the highest paid public sector employee is a university football or men’s basketball coach.

In the private sector, an employee’s benefits are at the discretion of the employer and tend to be less generous than those in the public sector.

According to a study by Cornell University, in 2013 the average graduate with a master’s in PA made $11,000 more as a starting salary in the private sector than MPA graduates did in the public sector.

Job candidates earn about $11,000 more a year with an MPA in the private sector compared to those in the public sector.

What Is the Public Sector?

A role in the public sector means that you are working for local, state or federal government. These jobs tend to pay less than many private sector jobs, but government employees tend to have excellent benefits.

A bonus to working in the public sector is it’s often easier to strike a work-life balance with federal holidays and paid time off for vacations and illness.

Working in the public sector means you can promote change in your community, state or country. A background in public administration gives you the tools needed to shape policy, direct departments and strategically plan. It can be very rewarding to work at a job where “the bottom line” doesn’t always dictate decisions and where profits aren’t the primary concern.

Government jobs are booming right now. According to the BLS, “Government employment increased by 10,100 since February 2017, the largest employment gain in the Chicago area. The local rate of job growth, at 1.9 percent, was greater than the 0.2-percent national increase.”

MPA Careers in the Public Sector

Some public sector jobs that would benefit from a background in public administration include:

According to the PayScale, “Urban planners map out the most effective use of a community’s land and infrastructure. They analyze economic, environmental, and social trends that help in the development of a plan for the land use.” Candidates for jobs in urban planning are more marketable if they are certified by the American Institute of Certified Planners. The median pay for an urban planner in 2017 was $71,490.

The mayor is essentially the CEO of a town or city. Mayors oversee a city’s main departments, including the police, fire, education, housing and transportation departments. At the same time, their responsibilities vary depending on the local power structure. According to the BLS, the average salary for a mayor in 2017 was $112,900.

Budget analysts help public organizations organize their finances. They prepare budget reports and monitor spending. A budget analyst must have a strong background in accounting and finance and a solid understanding of financial principles. The median pay for a budget analyst in 2017 was $75,240..

A city clerk is responsible for drafting bylaws of a city, recording the minutes of council meetings, answering public correspondence and preparing reports. A city clerk should have outstanding communication skills as they serve as a liaison between the public and elected officials. According to PayScale, median pay for a city clerk is $46,771.

Some private sector jobs that would benefit from a background in public administration include:

According to the Bureau of Labor Statistics (BLS), HR managers’ median pay was $110,120 in 2017. The BLS says, “Human resource managers plan, direct, and coordinate the administrative functions of an organization. They oversee the recruiting, interviewing, and hiring of new staff; consult with top executives on strategic planning; and serve as a link between an organization’s management and its employees.” HR managers also often work with executives to develop hiring and employment policies for their organization..

Training managers work in nearly every industry. They oversee staff and plan and direct programs to enhance the skills of an organization’s workforce. They also onboard new employees. These managers provide professional development opportunities and conduct trainings to keep the workforce current. They also support staff through policy or procedure changes in the organization. In 2017, median pay for a training manger was $108,250. The profession is expected to grow by 10 percent by 2026.

MPA Careers in the Nonprofit Sector

Grant writers solicit grants on behalf of nonprofit or government organizations. A grant is funding that an organization or individual can receive to start, complete or continue a project. Excellent communication skills are critical to this position. According to PayScale, median pay for a grant writer is $45,685.

According to PayScale, a nonprofit program director’s mission is to “get and spend.” This means that they are creating ways to build revenue and developing programs that serve the community or cause of the nonprofit. A program manager needs to be well-versed in project and budget management. They are generally responsible for staffing, recruiting volunteers, and developing budgets for their projects. Median pay for a nonprofit program director is $52,779.

What Is the Nonprofit Sector?

Nonprofit status is granted by the government after an extensive application and review process. Organizations deemed eligible are tax-exempt and must abide by a series of rules to maintain that status. There are many kinds of nonprofits that focus on diverse missions, including private foundations and public charities.

According to NASPAA, 26 percent of people who graduate with an MPA work in the nonprofit sector.

Most charitable nonprofits – 35.5 percent – are classified as human service organizations, according to the National Council of Nonprofits. These include groups providing food and shelter, assistance during times of disaster, and services for children, elderly and those living in poverty. Other nonprofits are focused on conservation, the arts, civil rights, animal protection, education and health. 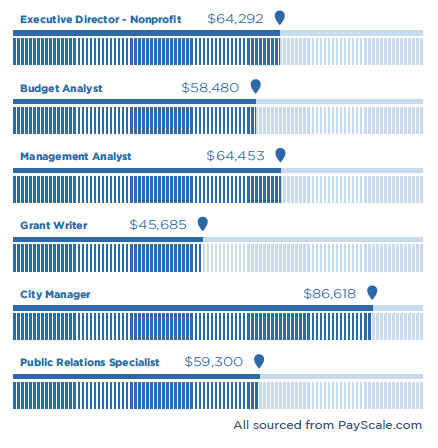 Aurora University’s online MPA degree program helps students develop the knowledge and skills to take leadership roles in public administration, whether it’s in the private or public sector. Graduates receive instruction from faculty members with real-world experience. The one-year program was developed in partnership with community leaders and public service professionals, so you can be confident that you’re getting the right education for your career goals. AU’s online MPA features coursework in community relations, budgeting, public policy and nonprofit management.